The secret to getting out of debt

The avalanche payment strategy organizes your outstanding debts by highest interest rate. With the highest rate debt at the top and the lowest rate debt at the bottom. You make the minimum payments on all your debts except the one at the very top. Any extra money you have available gets added to the very top debt each month until that debt is paid off.

When the top debt is paid off, that money drops down to the next highest interest rate debt. This is the start of the avalanche. This additional money speeds up paying off debt number two. It's just like an avalance where the accumulation of snow from above keeps growing as the weight of more snow is constantly added. As each debt is paid off the speed at which the next remaining debt is paid off increases. 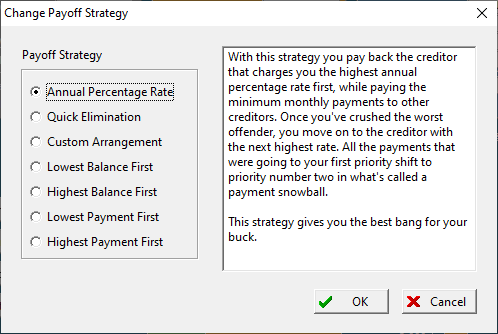 The snowball payment strategy organizes your outstanding debts according to how quickly they can be paid off. This puts emphasis on getting rid of the easy to payoff debts first. You make the minimum payments on all your debts except the one at the top of the list. Any extra money you have available gets added to this debt each month until that debt is paid off.

When the first debt is paid off, that money is added to the next debt in the list. This is the start of the snowball. This additional money speeds up paying off debt number two. It's just like a snowball where the accumulation of snow from rolling a snowball around adds to its size and weight. As each debt is paid off the speed at which the next remaining debt is paid off increases. 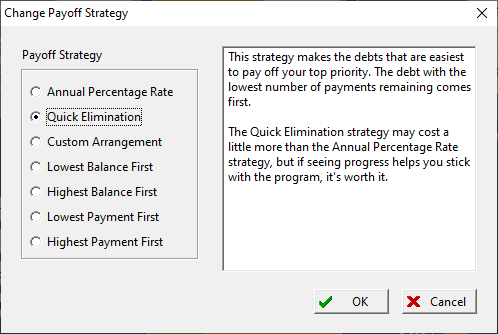 The concept of payment snowballing explained

The example we have in Zilch Standard has four but Credit Card Math uses five. To get started you assign a payoff priority to each debt.

Now, what does that mean? In life you can only focus on one thing at a time. Well, your repayment plan can only focus one debt at a time. The pledge money would get added to the first priority which is debt number one. By focusing on one priority at a time it maximizes the use of your money.

When the first first priority is paid off look what happens the money that was going to number one which is the payment plus the pledge money, now shifts to number two. Let's just watch the rest of this slide.

What do you think happens when two gets paid off? Exactly. So this is why each debt is being assigned a priority. When three gets paid off all the money shifts to four. When number 4 gets paid off everything is going to the last debt which would be priority number five. At this point your payment snowball is incredibly powerful.

After being trapped by the vultures in the credit card industry, I followed your advice and have started to make progress paying off my debts. I never knew about the ways these vicious companies keep a consumer paying for years and years. You have really opened my eyes to this problem.

I have followed your advice for 15 months. My minimums are so low its shocking but I keep making the amount I set up. It is almost laughable at how easy it is to get this paid off but without your help, I never would have been able to do this. Thanks again Mike. Keep doing what you're doing. And I hope you get rich and famous and live a fantastic life.

What Our Customers Say

Today is the day I get out of debt! (Motivational Video)

We believe you need to watch out for what we call "Debt Sharks". These are companies that prey upon people in debt because they know how vulnerable debt-ridden people can be.